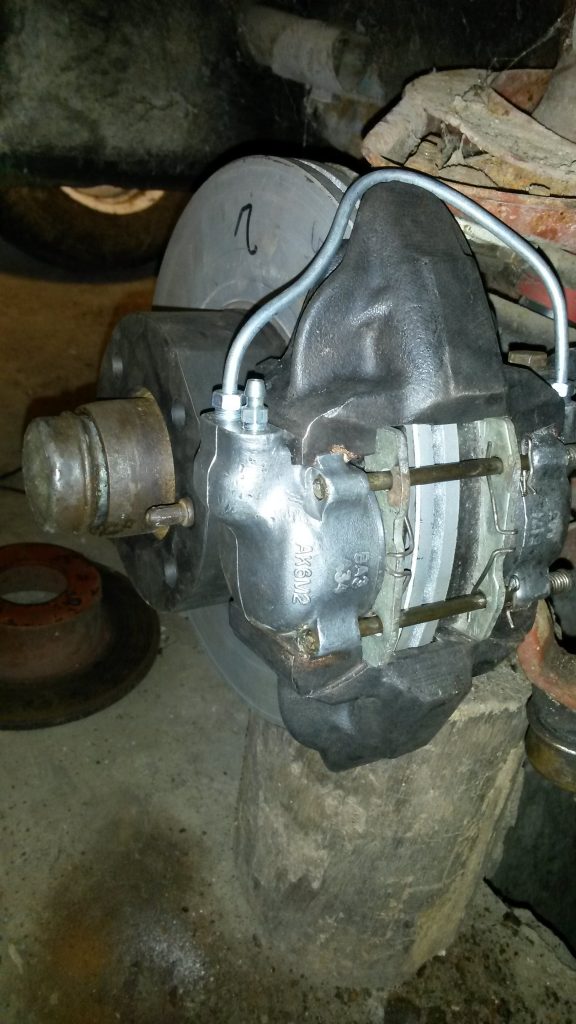 Reason for making them?

The main reason is the lack of suitable solution for this brand. There are aftermarket products, but they are too expensive, or required to much modifications to the car. There were a need for a solution that will improve the brake power of the car, be suitable for rally and racing, and utilizes the standard brake components with some modification, which will ensure that everything will fit properly.

What was the plan?

The plan was to find a suitable ventilated disc and use the outside of it. Mate this part to the center section of a standard Lada brake disc and do modification to the caliper accordingly to fit the new disc.

This took around day and a half looking around the internet for similar size disc that can be used in the intended purpose. After a disc was chosen, it was ordered and upon collection it was finally examined to confirm compatibility with the idea. 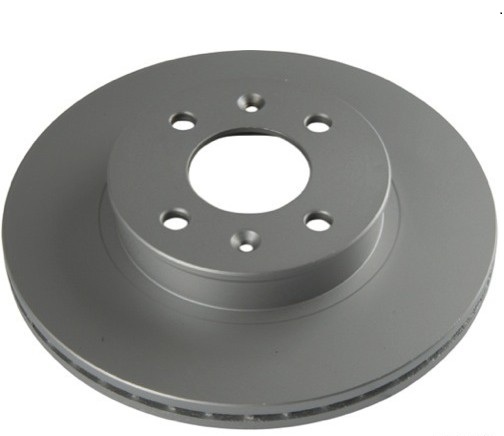 The standard brake disc used in this build

Second step was to decide on a way to mate the standard center section and the ventilated part of the chosen disc.

After several irritation the way was chosen, it is visible from the picture below. The fitment is precise(H7/h6). The breaking torque will be transmitted through four flat sides that will engage with four flat sides on the disc. The both parts will be secured with four screws. All the machining work was done on a precise CNC machine, to ensure good fitment between the parts and least possible runout in lateral and radial direction. 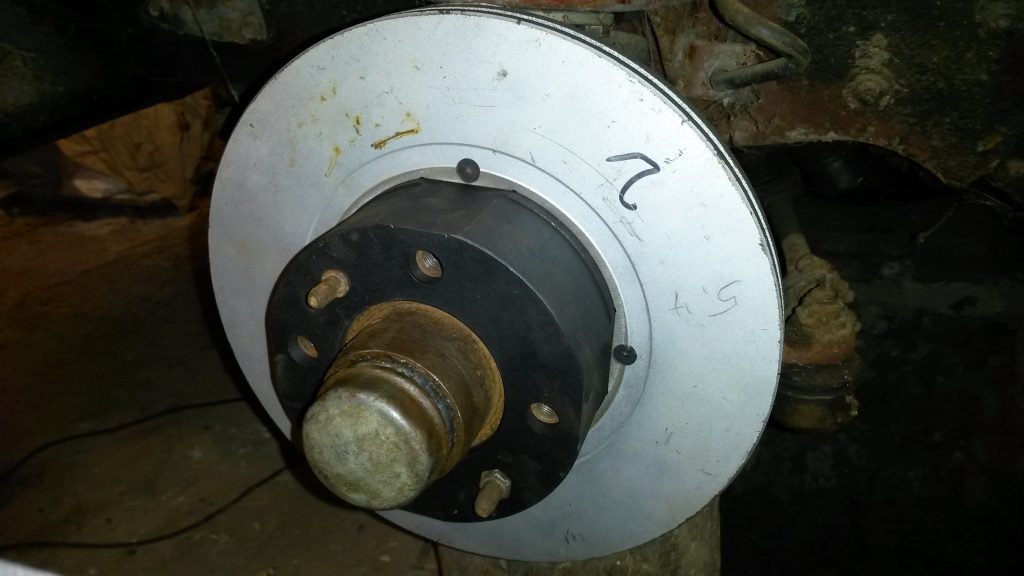 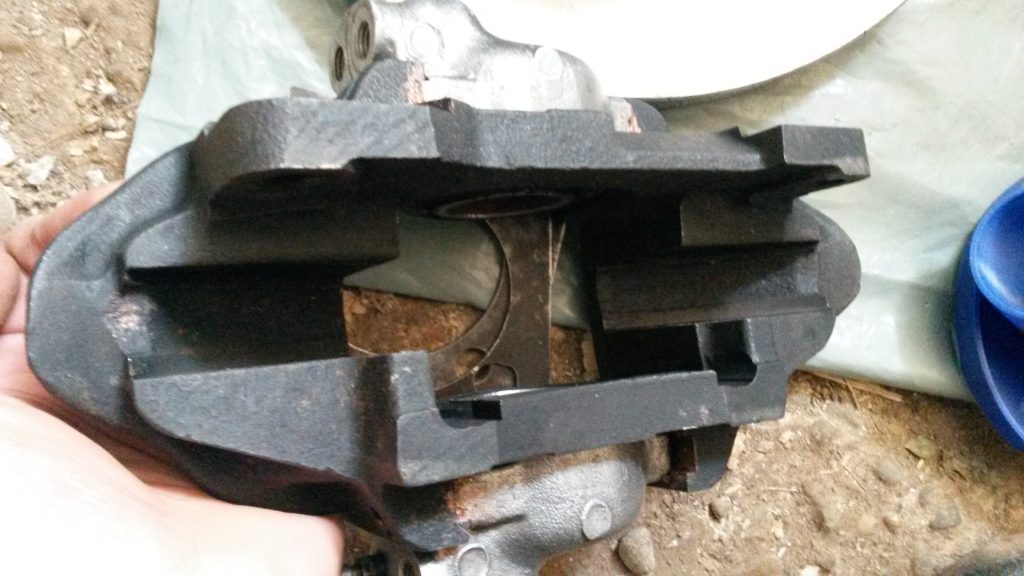 Next step involved shortening the brake cylinders and pistons to match the new disc thickness.

Again a jig was devised to hold the cylinder, so I was able to shorten it and make the profile around the top, so the original dust seal can be refitted. The pistons were just shortened in a lathe accordingly. 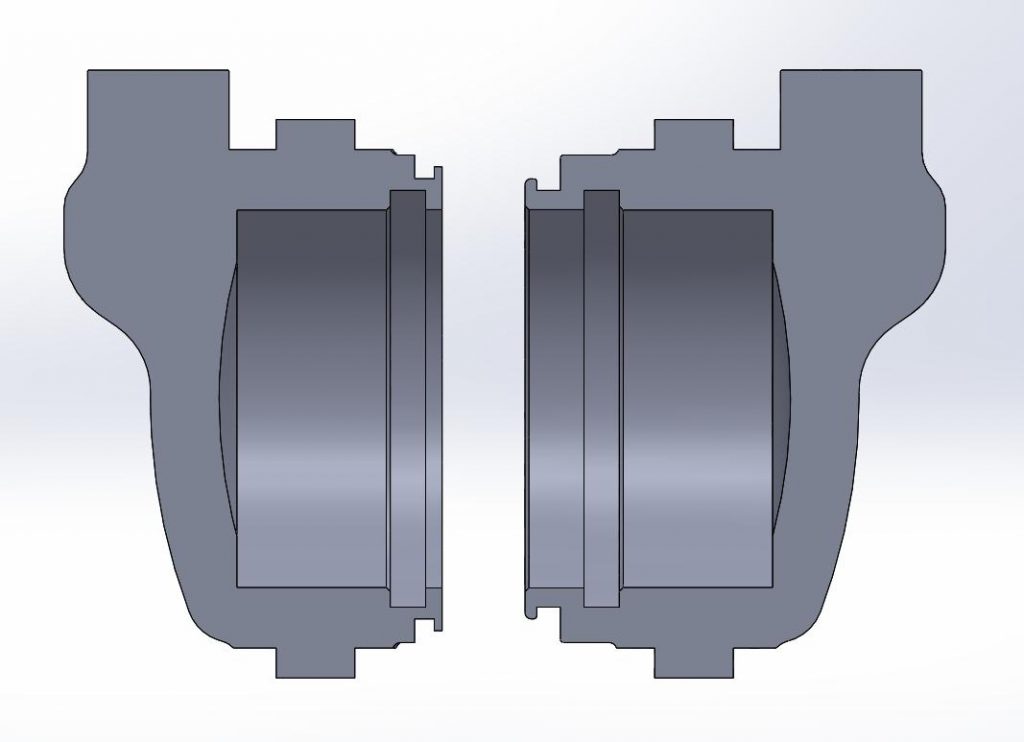 On the left is the modified piston and on the right is the original one. 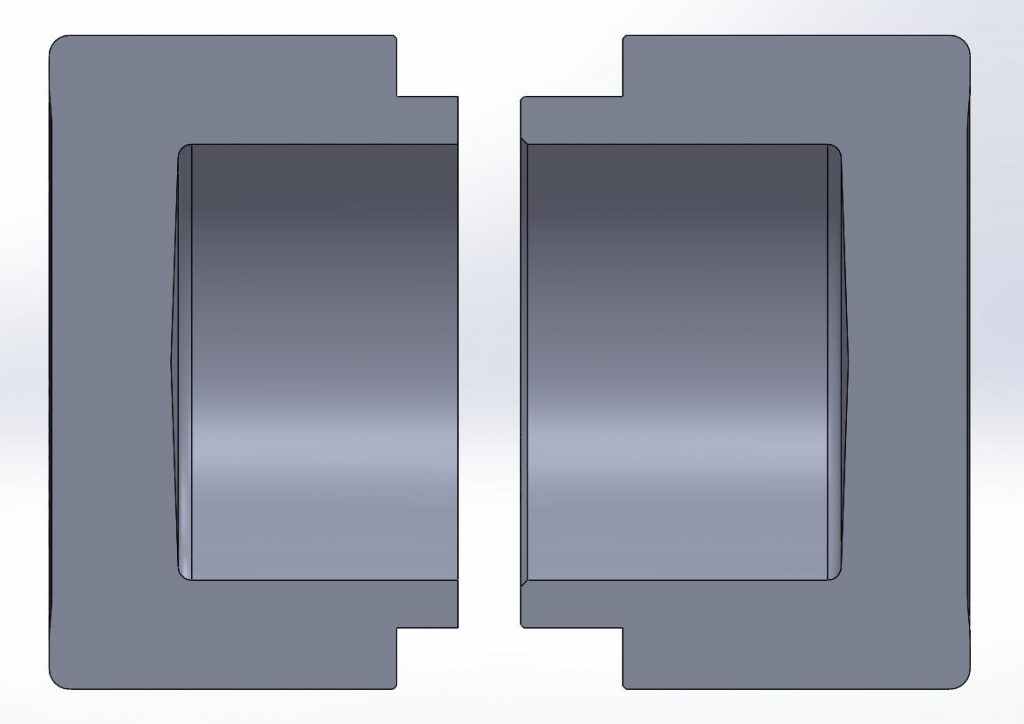 Casting backing plate from fiberglass and resin. Additional feature to improve cooling is the added cast hollow boss that can be connected to a hose and force feed cold air to the inside of the brake rotor.

The rear brake of the Lada were converted from the original drum setup to discs. For the purpose, were used original front caliper and disc. Special brackets were made to fit the calipers. Both brackets are different, because of the design of the rear axle. 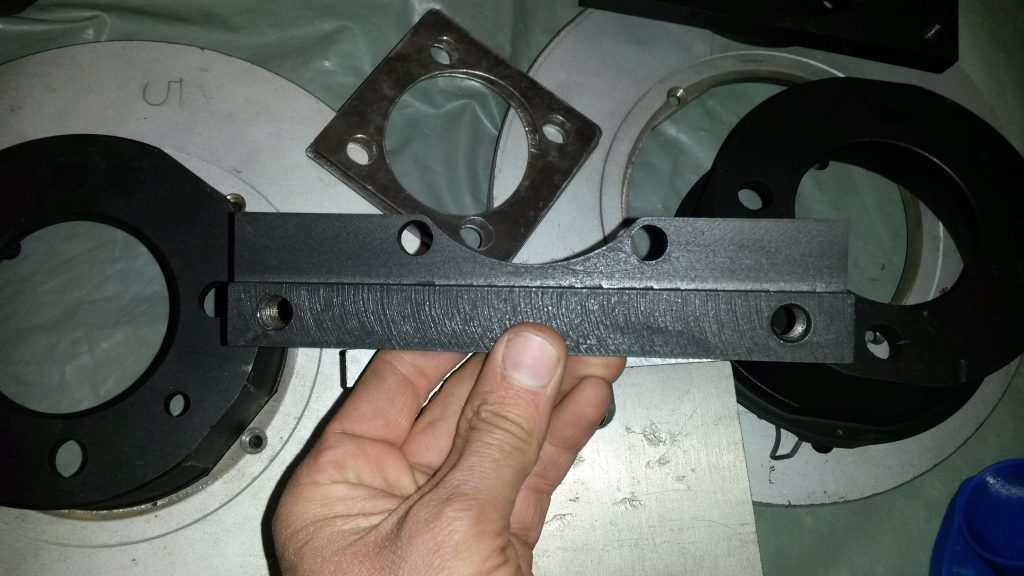 The bracket for the rear passenger side caliper 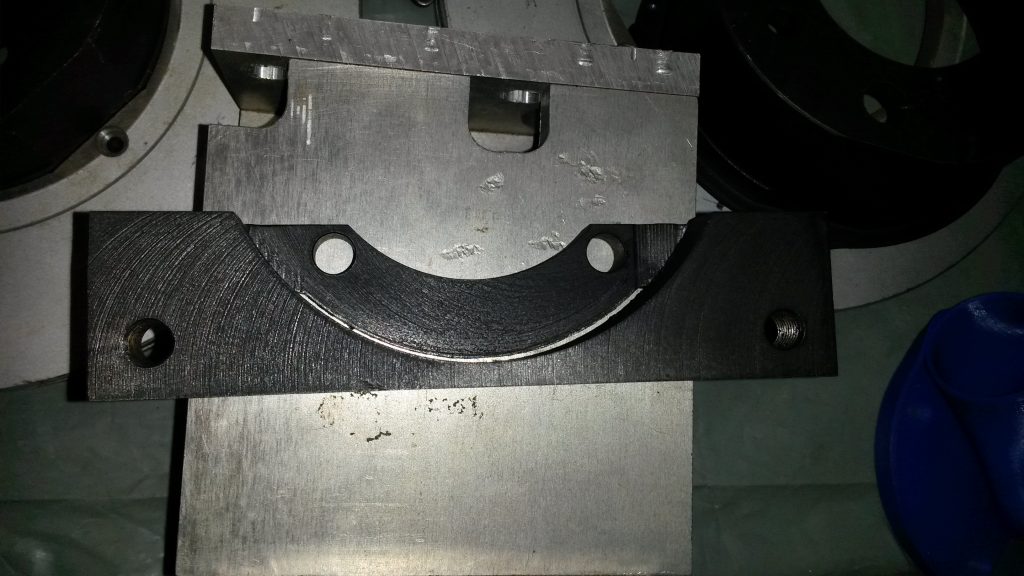 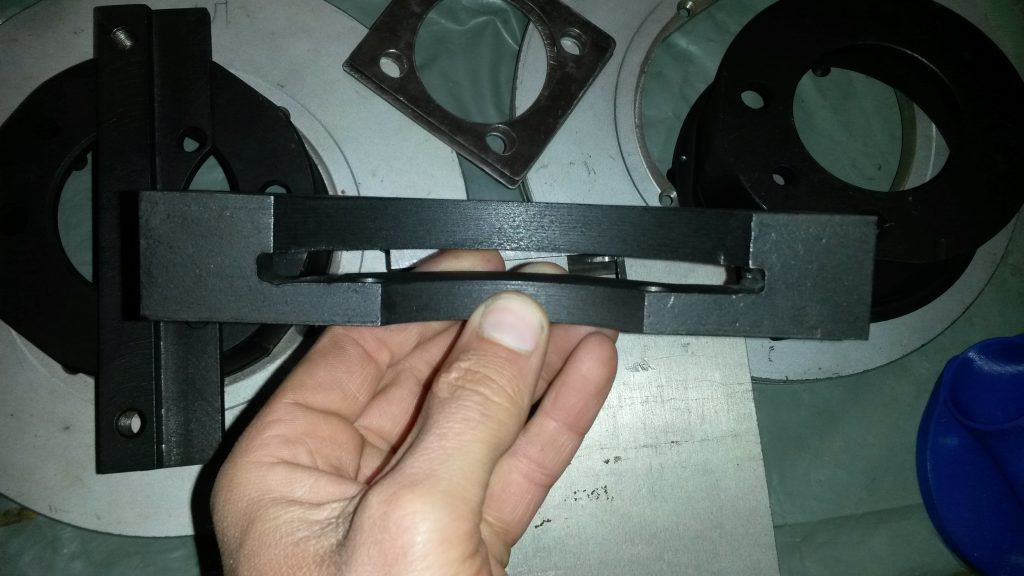 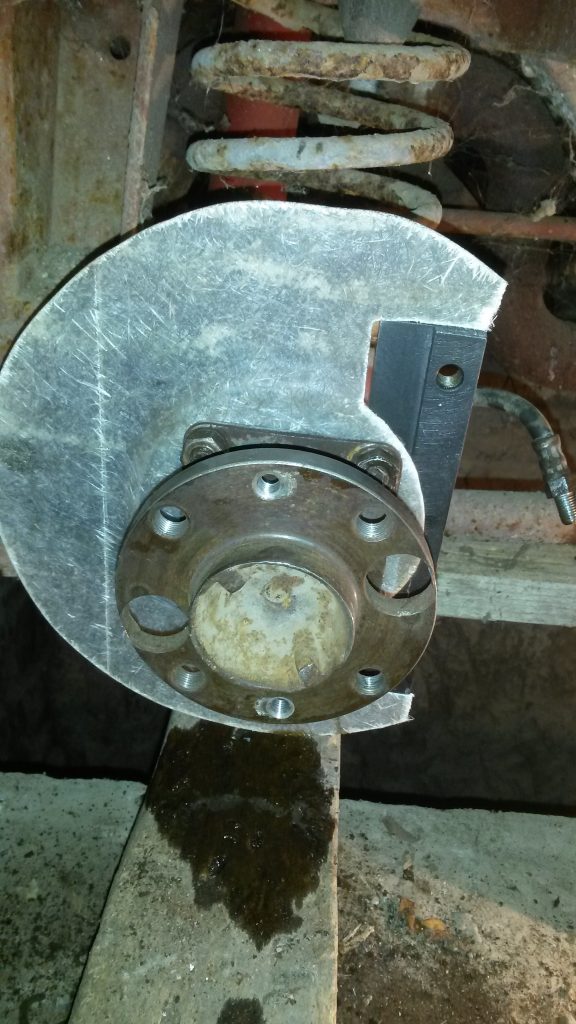 Passenger side bracket with the backing plate assembled 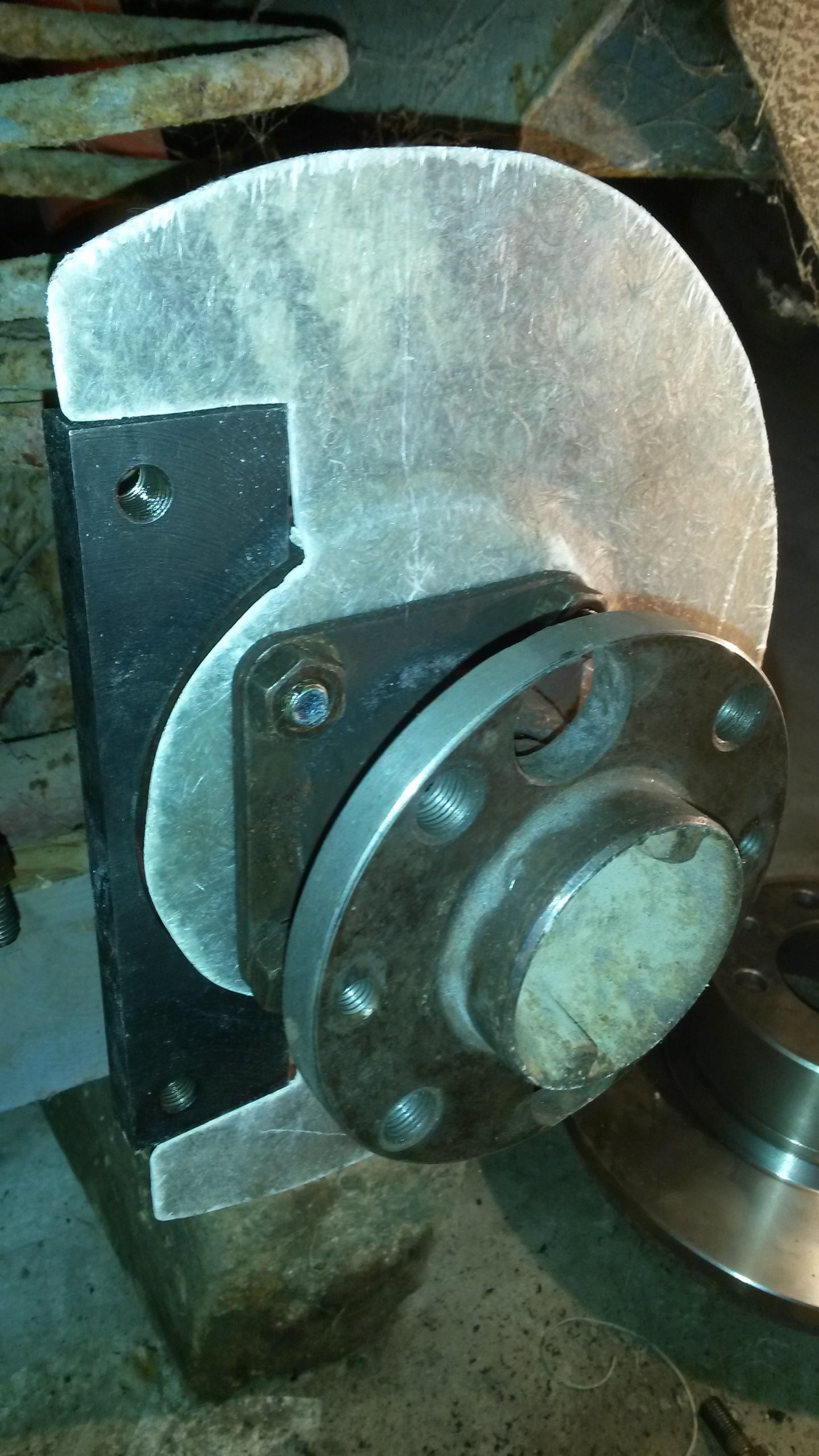 Driver side rear caliper bracket with the backing plate, before the discs are installed

An issue was encountered with the passenger side brake. The brackets are mounted on the outside of the flanges at the ends of the axle and the passenger side was not flat, which required some shimming to get it straight relative to the disc. At this point I got a new idea about the brackets that will make them the same and avoid the problem with the unevenness of the flange. 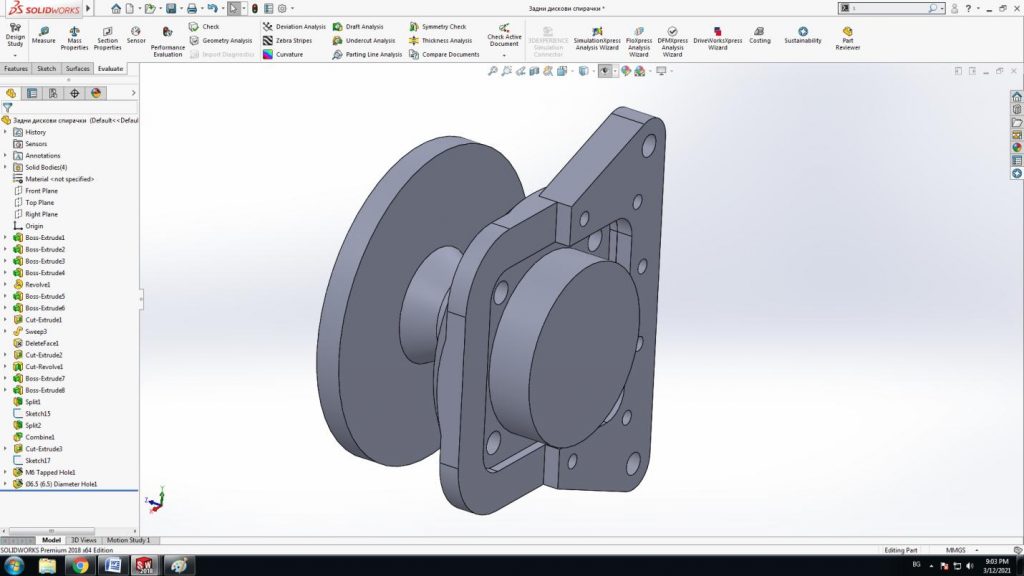 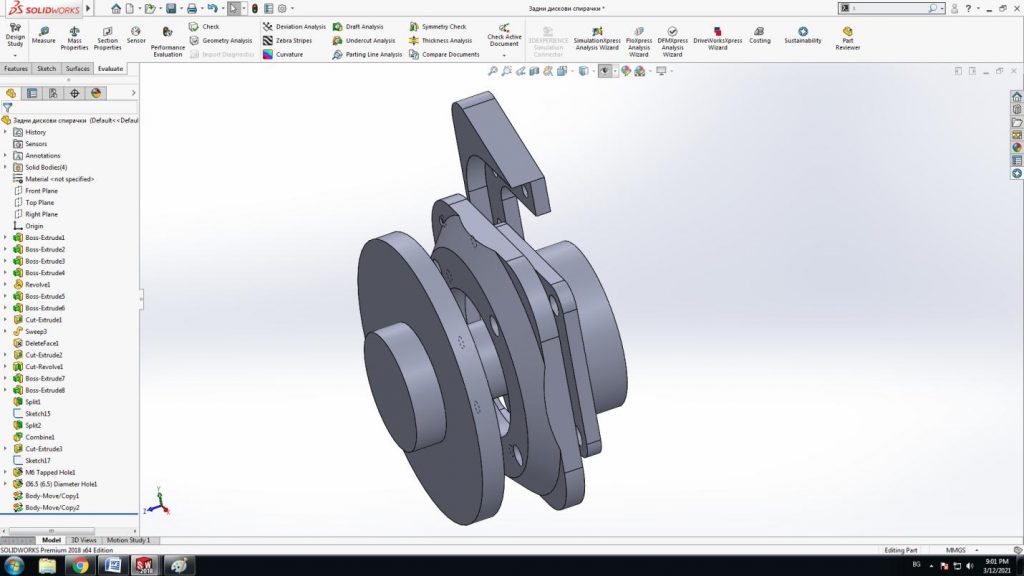 Making this modification leaves you with one serious problem, the handbrake. A lot of people put a hydraulic handbrake with this setup, but this is illegal for the street. The handbrake should be a separate system, because in case of main brakes failure, one will still has braking power.  For this reason I developed a separate brake caliper dedicated to the hand brake. It is mechanically operated and will keep all the original handbrake lever, cables, and brake pad. They are little too big for that purpose, but will work fine. The engineering of it is almost done, just needs few corrections and a way to attach the original cable. 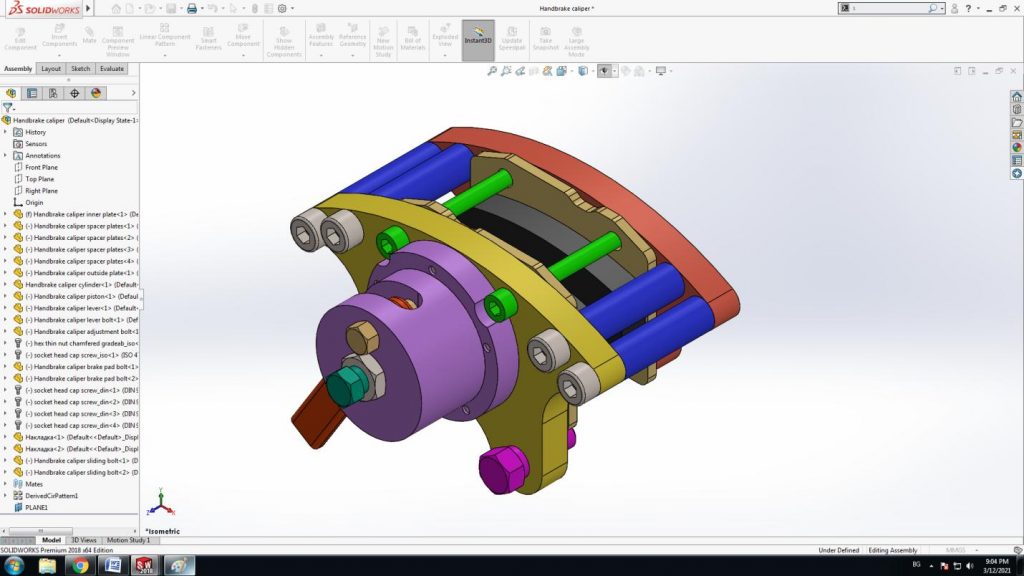 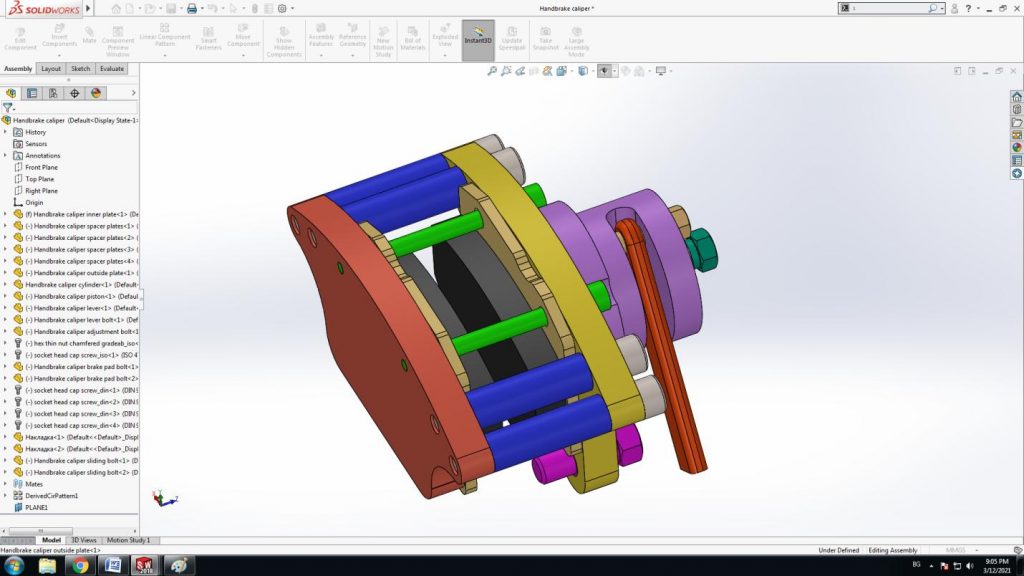 Up till now the modifications could be put in the graph of car improvement, spirited driver. Next modifications are aimed to further improve the performance of the brake system to meet the criteria of circuit racing and the harsh environment of rallying.

One of the main things for brake system to utilize it’s braking potential, apart from being mechanically sound and the grip available is the brake bias, which will greatly influence the performance and the stability of the car. This can be set in a various ways and an easy way to do changes while driving is also good option to have, so you can adjust to the changing environment. This are some of the consideration taken while developing the brake bias unit for the classic models of Lada.

The first step was to determine the sizes of the brake cylinder for the front and back. This was done by following the calculation method found in the book “Brakes” by Fred Puhn. The book is a little bit old, but the principles stated there are applicable.

After some assumptions were made and the calculation carried out, the size for the front came out to be 19.05mm and for the back 29mm. For the front standard clutch pump from Lada is used. The back was a bit more complicated, because there was nothing available locally, so I went ahead and cast one. It is machined and ready for testing.

The unit has a feature allowing the driver to change the brake bias on the fly. The balance bar has an adapter on the end, that via cable is connected to a knob mounted somewhere in the cockpit, where it is easy to reach from the driver. The knob features spring loaded ball that fixes it into desired position. There are 8 indentations and the clicking made it easy to track the changes you make. 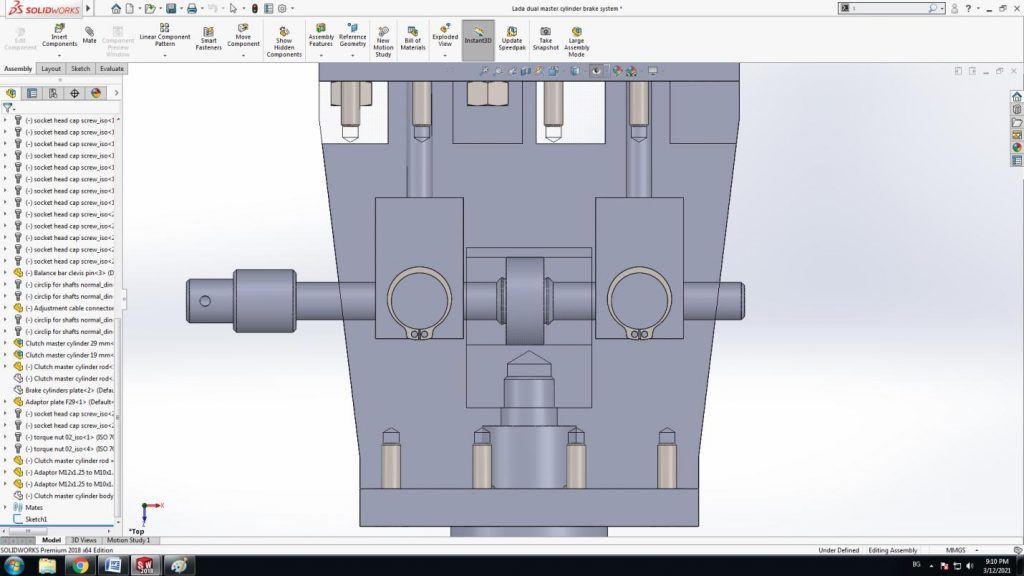 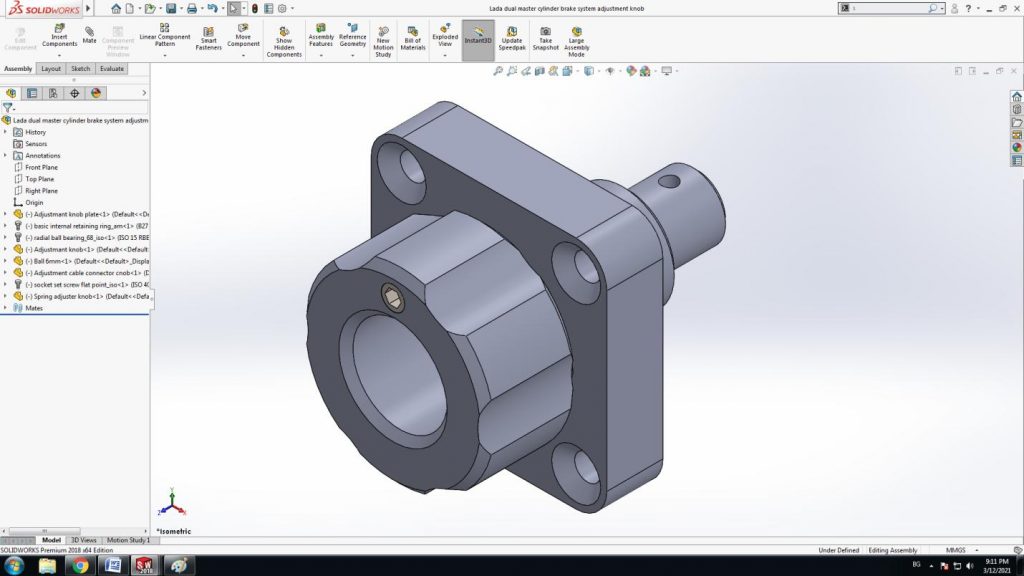 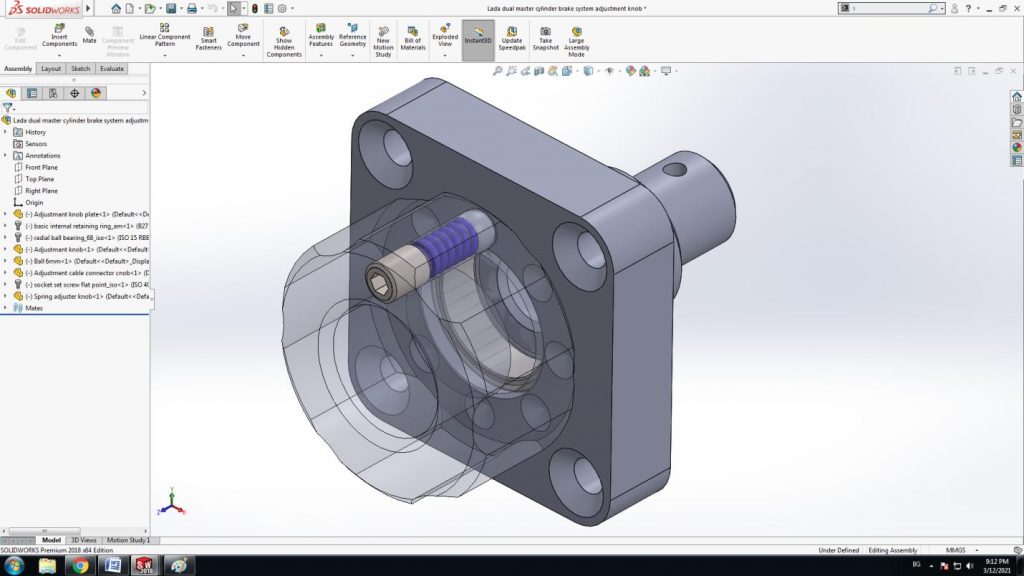 The final part to complete the brake system is a hydraulic handbrake.

Nothing special here. Simple design that will do the work. It has two options for cylinders. It can be fitted with Honda or Lada clutch pumps. The lever can be mounted in vertical or horizontal position. In vertical position the whole handbrake can be turned 180 degree, so you have the cylinder at the back or at the front, depending on your preference or space constrains. When it is turned with the cylinder facing forward, you have to move the pin of the lever to the according hole to maintain the pull operation, or leaving it as it is will make it push actuated. 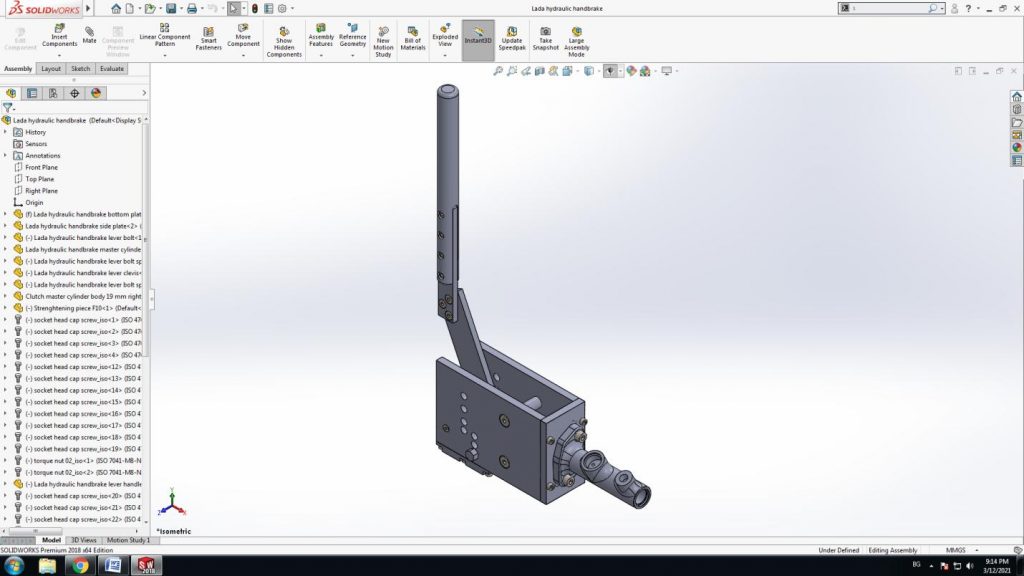 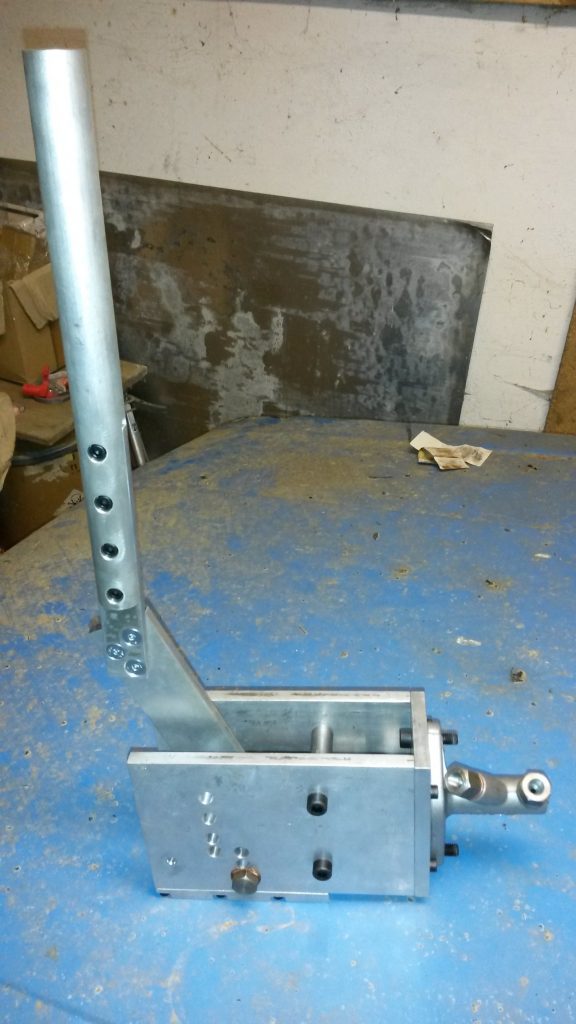 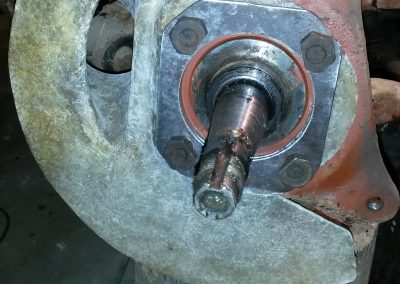 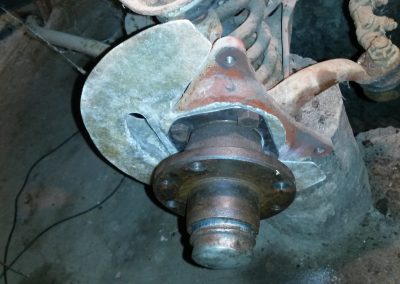 Lada fron spindle with the backing plate and hubinstalled 2 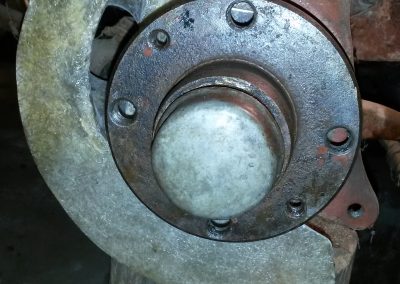 Lada fron spindle with the backing plate and hubinstalled 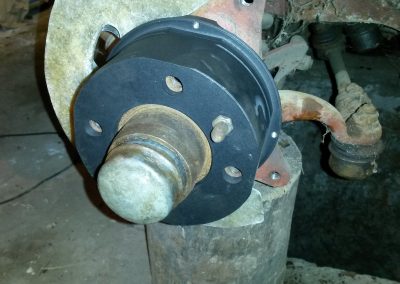 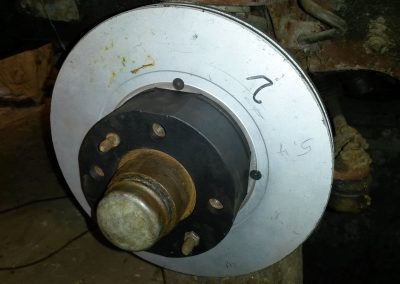 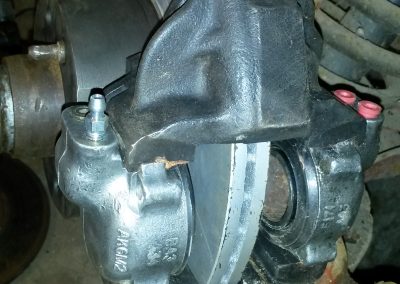 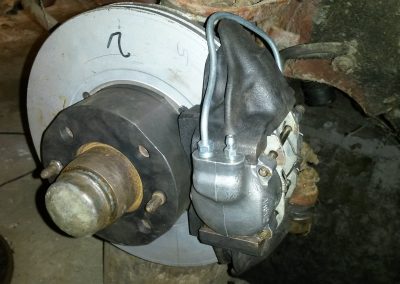 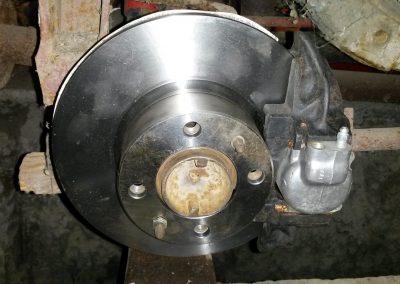